An Hour on 'Lumpy Skin Disease' 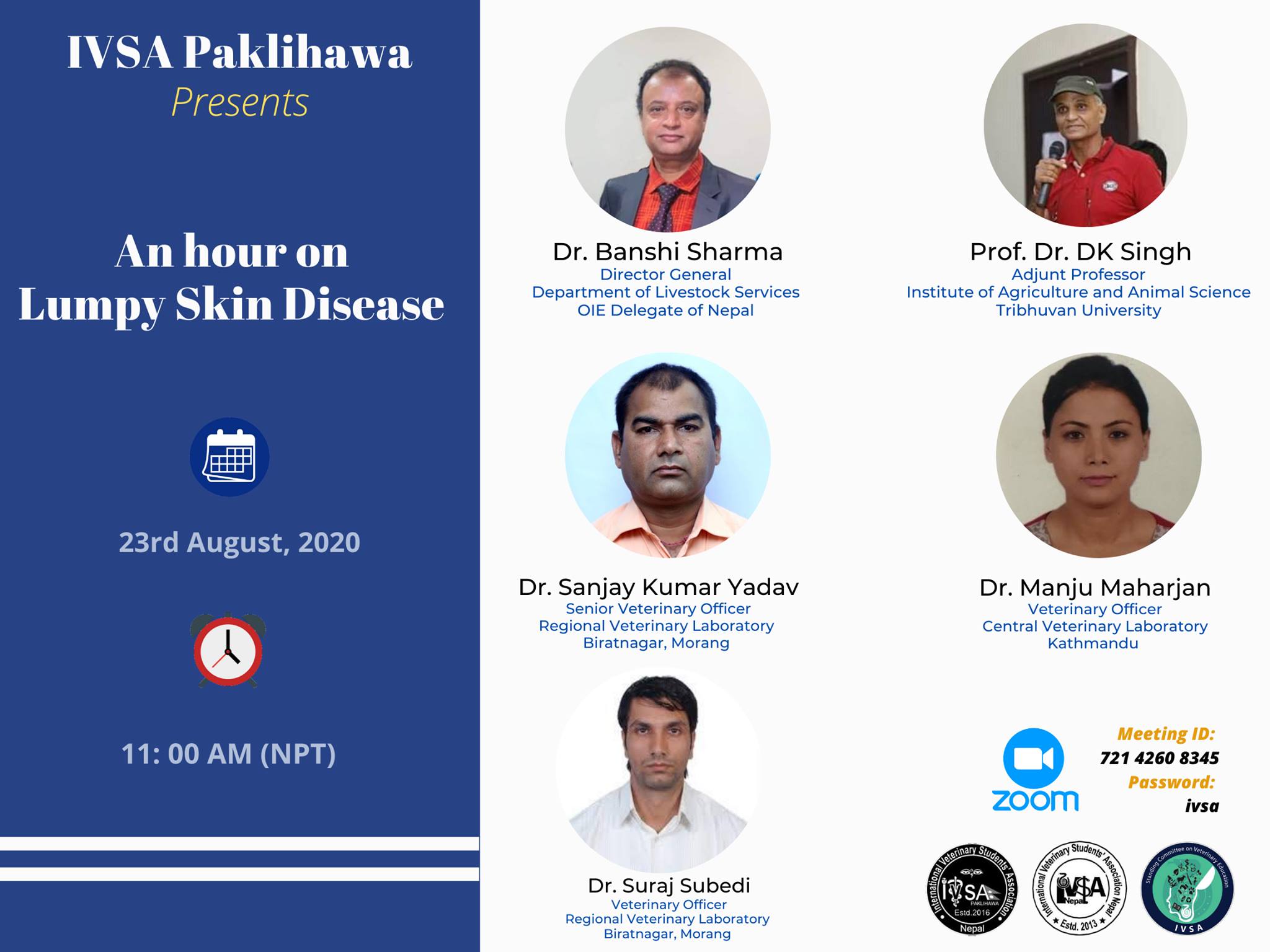 An Hour on 'Lumpy Skin Disease'

The session started with brief introduction of every speakers and proceeded with questions from IVSA Paklihawa team to the panelist one by one. The answers summary of each speaker is enlisted below:

1) Dr. Banshi Sharma (Director General, Department of Livestock Services, OIE Delegate of Nepal) : Lumpy skin disease is a new disease for Nepal. Despite of the quarantine services and lockdown in the country, the open borders of Nepal have led to the outbreak of this disease. The Department of Livestock Services, OIE Focal Points, OIE Headquarter professionals have been discussing the issue.

The LSD virus falls on Poxviridae family and two types of vaccination are possible. Firstly, Homologous vaccine of LSD strain and secondly, Vaccine from Sheep Pox to provide cross immunity. Scientifically homologous vaccination is preferred. The vaccination protocol depends on country's strategies. In Nepal, less than 1% have been vaccinated. As this is live attenuated vaccine, the vaccination must be carried out in uninfected areas after strong clinical serosurvelience and proper laboratory backup. In risk areas, ring vaccination is to be performed. ACC to OIE, about 1,00,000 homologous strain of vaccines coverage is estimated to different provincial states. The Biratnagar regional labs should be strengthened through adequate RT-PCR kits. Since, vector transmission is seasonal, sanitation, hygiene, and biosecurity measures are to be well considered. Alternatively, judicial use of vaccines is to be considered. Lastly, farmers problems are being analyzed and short and rapid diagnosis is being done.

Viral secretion present in Bull Semen caused necro hemorrhagic Volvo vaginitis in female. Incubation Period: 7-30 days Skin lesions: peculiar: initial stage- no nodule, then brisket and nasal secretion; after somedays skin lesions seen first macula then papules leads to nodule, when it gets older, it has center depression, necrosis; when peel out - ulceration carrier state is not found. There is no proof of infectious wild ruminant in Nepal: reservoir not found with no clear scientific evidence.

Immunity: vaccine can also cause infection therefore it should not be given in non-endemic areaIf nodule appear after vaccination, it may contain high titer of virus.

Tx: oral/parenteral NSAIDS for fever antibiotics; oxytetracycline- a broad spectrum antibiotic Fluid therapy/saline; Dextrose one is good as the patient may show hypoglycemia; vit C, vit E injection administration and there is no need of antihistamine, fly repellents and wound dressing.

Early treatment should be given if possible. Giving diuretics for local edema in skin and brisket, is contraindicative as it further leads to dehydration and hypovolemia.

Nodule also seen in gall bladder (Arab countries) and also in trachea, pharynx and mouth.Mortality is less (0.03- 30000-30/40) suggestion: A golden opportunity for master students to do research in this disease as signs and symptoms differ from the other countries.

This disease started in Morang district and areas near it. In those areas, Trypanosomiasis is also dominant. 10-20 blood sample of protozoal parasites are taken for hematological tests. After farmers reported the symptoms, we sent team to the field. By immediate response, discussion and net survey we doubted LSD. Then went to field for 2-3 days and observed the animals. LSD was suspected as non-confirmed at the time till. DLS, Morang inquired us regarding photo posted by us in social media. By many findings, such as nodules, whole body lesions, swollen scapular and lymph nodes, swollen legs in Holstein and it's breeds too.

Latest updates say 30000+ are affected in 4/5 districts and known to 30/40 moralities. Economic impact of the disease is high than that of FMD. It leads highly emaciation, decrease in milk production and infertility. Policy need to be made as strains aren't identified. The PCR kits were delivered from France, then LSD is now confirmed.

Scientific Literature says LSD has no carrier state. In Nepal, the outbreak was firstly noticed in Asadha 11 but thought to be come before 2/3 months (falgun /chaitra) At that time Animal Movement was possible due to no lockdown. Could have transfer due to Hatiyas.

Related to vaccination, it differs according to strain, so might differ in its application as well. Banglaesh- Gout pox vaccine Turkey- 80-90% coverage vaccine, Uganda seasonal vaccine

Other ways to control mortality: Immunity booster, multi vitamin etc Multi vitamin if parenteral then it's preferred. Regarding fluid therapy: 2-5%.

4) Dr. Suraj Subedi (Veterinary Officer, Regional Veterinary Hospital- Biratnagar): On the basis of field experience on LSD, Dr. Subedi stated that the disease was 1st observed and suspected as LSD from its clinical signs and symptoms on 11 Ashar, 2077 at Jhorahat VDC in Morang District of south eastern Nepal. After Local Veterinary Technician of that region had brought the blood of affected cow showing the lesions such as nodular growth presented over whole body, fever, severe decrease in milk production, emaciation etc. to diagnose in Regional Veterinary Lab, Biratnagar, the disease diagnostic team under the supervision of Senior Veterinary Officer, Dr. Sanjay Kumar Yadav moved forward to observe such cases in field level. In many places of Morang, Sunsari and Jhapa, they observed similar signs and symptoms in affected cattle. Some of them are:

As they suspected disease as LSD from clinical signs and symptoms and through literature review, but for further confirmatory diagnosis of the disease, they collected serum, blood and tissue sample of the affected animals and immediately send to Central Veterinary Lab (CVL), Kathmandu as the equipment needed for diagnosis was not available at Regional Veterinary Lab, Biratnagar.

After the RT- PCR test of sample at CVL, the disease was confirmed as Lumpy Skin Disease (LSD).

He also explained that diagnostic team of Biratnagar had conducted awareness generating program on LSD among the local veterinary technician and farmers of the affected area. In the program, they had also discussed on the treatment protocol and preventive measures for this disease.

He added that since the virus belong to Pox Viridae family, genus Capripoxvirus having double stranded DNA as genomic structure, they are highly resistance to physical and chemical action. So, virus isolation can be done from skin lesion and scrubs for about 33 days of infection, from preserved intact skin nodules we can detect virus after more than 10 years, from saliva and nasal discharge of experimental animal virus can be isolated from day 2 to day 28 after infection, in semen virus can be isolated 42 days after post infection. He states that the skin lesion is the best sample for virus detection as virus load is present more over there. Serologically it is very difficult to distingue Goat Pox, Sheep Pox and LSD virus so PCR test is best diagnostic tool for virus detection. Finally, he added that LSD is not a zoonotic disease from literature review and field experience.

5) Dr. Manju Maharjan (Veterinary Officer, Central Veterinary Laboratory, Kathmandu) : The central Veterinary laboratory has awaken when Dr. Sanjay Kumar Yadav shared photos of skin lesions in Facebook and we also suspected as LSD. Then we started our preparation. Due to lack of LSDV sequence, we were compelled to use PCR kit (ready to use). We have received the 1st sample from Morang which includes serum, tissue, blood, and nasal swabs. These all samples tested positive. But the tissue sample is considered to be better as the nodule swab in tissues give best result. Also, we have received the tissue samples for histopathology for which we have already prepared the slides and now just waiting for experts. There are also PCR machines in Regional Vet. Lab. but it may take some more time to function fully. That’s why, there is only the Central Vet. Lab. for diagnosis of LSD till now. We have received samples from various districts like Morang, Tanahun, Pokhara, Makawanpur, Kavre and Kathmandu. A sample of buffalo from Pokhara also showed positive.

The program was really interactive and informative and lasted for almost 2 and half hours although it was designated to be an hour. There were more than 100 participants in the program who enthusiastically listened all the speakers till the end. The session ended with wonderful and remarkable words from Mr. Santosh Panta (President, IVSA Paklihawa).

We would like to acknowledge all the honorable speakers for providing wonderful information despite of their busy schedules. We are also thankful to all the participants who made it to the program.